My nephew is called Vasilena and she is only 12 years old. She has been playing chess for 3 years and already had several wins. Let's wish her good luck in the future !

Have you ever tried to play ThreeChess? You can now try and play for free at: threechess.com

Join our brand new photo contest at VOUBS for the chance to win a luxory table to play threchess with your friends!

* Upload a black and white photo to join our contest with purpose to raise awareness and promote threechess game around the world.

Share your photo with more people to get votes and help us to spread the word about threechess if you like it. We will be more than happy to review your unique photographs.

The origins of chess are not exactly clear, though most believe it evolved from earlier chess-like games played in India almost two thousand years ago. The game of chess we know today has been around since the 15th century where it became popular in Europe.

Same is the history of the three player chess. The game Sanguoqi, 三 國棋 Three Kingdoms Chess, is a Xiangqi variant for three players, mentioned in H.J.R. Murray's book "A History of Chess" on pp 133-134. He cited von Möllendorf who wrote an article in German, titled "Schachspiel der Chinesen", in 1876. This original work is available here. One century after, in 1972 Robert Zubrin invented three player chess and started selling the board game over the U.S.A. It is also quite popular game in Europe and is being sold in some countries. In 2010 we created the FIRST ONLINE variant of the chess for three players and named it ThreeChess. It is available on www.ThreeChess.com.

ThreeChess is a game played between three opponents on hexagonal shaped board containing 96 squares of alternating colors. Each player has 16 pieces: 1 king, 1 queen, 2 rooks, 2 bishops, 2 knights, and 8 pawns. The game is played in Free for All mode, where every player plays for himself. The goal of the game is to take one of the other two kings. Check is when the king is in danger. Checkmatehappens when the king is in a position to be captured (in check) and cannot escape from capture. The first who CAPTURES one anothers KING is the WINNER. This is the little difference in ThreeChess that makes the game interesting and challenging. Checkmate is not enough as in classic chess, you should take the king. When a player is in a checkmate possitiion he looses his turn. And if somehow he is freed up, he can move again. 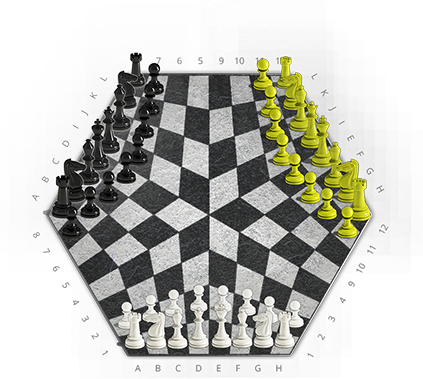 At the beginning of the game the chessboard is laid out so that each player has the white (or light) color square in the bottom right-hand side. The chess pieces are then arranged the same way each time. The second row (or rank) is filled with pawns. The rooks go in the corners, then the knights next to them, followed by the bishops, and finally the queen, who always goes on your left square, and the king on the remaining right square.

The player with the white pieces always moves first. Therefore, players generally decide who will get to be white by chance or luck such as flipping a coin or having one player guess the color of the hidden pawn in the other player's hand. White then makes a move, followed by green, then black, then white again and so on until the end of the game.